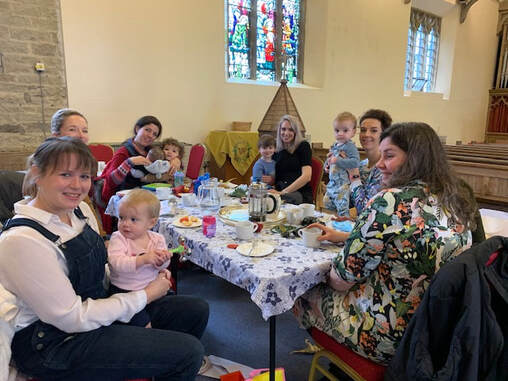 We run a Community Cafe each Tuesday morning, to which everyone is welcome. It opens at 9am and coffee and tea, with a variety of delicious homemade cakes or biscuits, are served until 11.30am.

Volunteer servers come from the village Community Group, school, Women's Institute and our congregation. Please drop us a line if you would like to help.

If you're at a loose end and would like to meet friends old and new, do come along.

​ Farnley Tyas is home to some excellent bakers and you never know what treasures await! There's no charge, but donations are welcome.

SNAPSHOT OF OUR ACTIVITIES

Pupils from Farnley Tyas Church of England First School sang Christmas carols and songs at our Tuesday Community Cafe.
Ready, aim fire. Cath and Lindsay takes charge of extinguishers as part of a fire safety demonstration.
Jim Cowell conducts the Farnley Singers in our 2022 Service of Lessons and Carols. Then choir and congregation gather for coffee

Job well done. The handsome exterior of our new extension.
Plans for the development scheme © One 17 Architects and Interior Designers.

More than 40 years of illegal marriages at Farnley Tyas 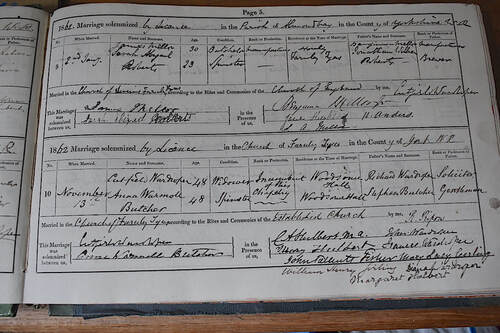 Forty years of illegal church weddings? It would be a modern tabloid scandal, but this happened some time ago...

​Canon C A Hulbert, Vicar of Almondbury from 1867 to 1888, believed that St Lucius' Church had 'the Bishop's Licence for Marriages within the township'.

​But there had been some irregularity in the arrangement, for when Canon W Foxley Norris succeeded Canon Hulbert in 1888, he discovered to his horror that St Lucius' had not been properly licensed.

Consequently, all the marriages solemnized there since 1841 were illegal – including that of the Vicar of St Lucius' – and the children born of  such unions, illegitimate.

Canon Foxley Norris confided his discovery to Sir John Arthur Brooke, MA, JP of Fenay Hall, and between them they obtained an
Act of Parliament whereby all the marriages were legalized and the children duly made legitimate.

​The first entry in the Register of Marriages at Farnley Tyas is for February 4, 1841, the year after the church was consecrated. It records the marriage of bachelor John Schofield, a carpenter, to widow Amelia Hampshire, both described as being of 'full age'.

Also detailed is the 1862 marriage of the Rev Cutfield Wardroper, then vicar of Farnley Tyas, to Anna Warmoll Butcher. The ceremony was performed by the Bishop of Ripon and witnesses included Canon Hulbert.

Wardroper ministered at St Lucius' for 51 years, riding to services on a white horse from his home at Woodsome Hall. In his retirement, aged 86, he married his fourth wife, 45 years his junior.

​The picture records the marriage of Wardroper, who had officiated at the wedding ten months earlier of Sarah Roberts and James Mellor.