Sharing the love of Christ in the community 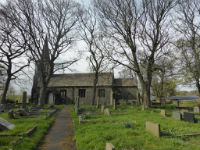 St Lucius’ Church in Farnley Tyas dates from the 19th century, the foundation stone being laid in 1838 and the building completed and opened for worship in 1840.  It is not of typical Victorian construction but is open, spacious and welcoming.

It was first gazetted as a separate parish in 1896, which it remained until 1976. It then became part of the united benefice of Almondbury with Farnley Tyas in 1982. In 1987 the Team Parish was formed. St Lucius’ has an open graveyard, maintained by paid and voluntary workers.

The church has a toilet and kitchen, as well as a large area which is well used by both church and community groups, especially the village Women’s Institute. The Church is handsomely furnished with limed oak. There is great affection for the church which is popular for baptisms and weddings.

Farnley Tyas has a good rapport with its Voluntary Controlled first school which uses the church regularly during the school year. There is a ‘Travelling Crib’ during Advent which is enthusiastically hosted by families living in the village.